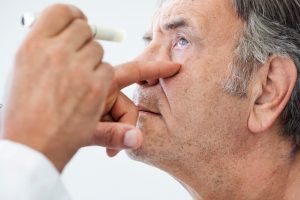 November is National Diabetes Month, a time to focus on diabetes prevention and management. About 10 percent of Americans have diabetes, a disease that affects the body’s ability to use glucose for energy. Diabetes is especially prevalent among seniors, affecting about 25 percent of Americans age 65 and older.

Diabetes Can Double the Risk for Cataracts

According to a recent study in the United Kingdom, having diabetes can double the risk of developing cataracts, an eye disease that progressively clouds the lens of the eye and blurs vision. Among all age groups, the study found that the relative risk for cataract development is highest in adults between the ages of 45 and 54.

The study looked at medical records from over 56,000 patients who had diabetes and were older than 40. Cataract diagnosis among this group was 20.4 per 1,000 people compared to 10.8 percent per 1,000 people in the general population.

If you have diabetes, you can protect your vision by scheduling regular eye appointments with an ophthalmologist. Frequent check-ups allow your eye doctor to monitor your eye health and detect diabetic eye diseases like cataracts, as well as glaucoma and diabetic retinopathy.  These diseases often develop without noticeable symptoms, so early detection is paramount.

Make an appointment for a comprehensive eye exam during National Diabetes Month. Even if you do not have diabetes, you should make an eye appointment as part of your commitment to your vision health.